Tatar shamail: the Word and the Image. The Art of Calligraphy. 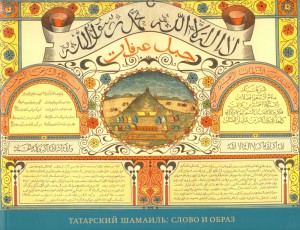 The exhibition celebrated Tatar shamails, a kind of traditional religious calligraphy, which is considered as one of the most unique traditions of the Volga-Ural region, featuring some 70 objects drawn largely from the collections of the Mardjani Foundation, The State Museum of Fine Art of the Republic of Tatarstan and private ownership.

Compared to both an icon and a lubok print, a shamail speaks symbolically varied language of Qur’anic sentences, moral admonitions and symbols of the popular Islamic beliefs, interlaced in splendid intensive ornamental and imagery framework. In houses it was usually placed at the room entrances.  Unlike panel paintings it was thought not only as a kind of interior decoration, but felt as a symbol of the realm of the Divine Providence to purify a house and protect a family.

The exposition displayed the oldest and rarest glass shamails, made of foil applications and painted inscriptions on the inner side of mirrors, as well as printed shamails and artworks of modern calligraphers. The principal focus was a selection of the so-called printed shamails, been widespread in Kazan in the end of 19th to the beginning of the 20th centuries. Its appearance and content provide us an insight into the cultural and intellectual self-identification of the Muslim Tatars during this period.

Among works by modern calligraphers were imitations of the glass shamails as well as new interpretations of Arabic and Persian manuscript tradition and abstract artworks.  Other significant additions included graphics by the famous Tatar painter Baki Urmanche, whose works in 1970’s breathed a new life into exquisite and elegant art of the Arabic calligraphy and the Tatar shamails.

The exhibition was initiated by the Mardjani Foundation.  It was organized by the State Museum of Oriental Art, Moscow, The Mardjani Foundation and the State Museum of Fine Art of the Republic of Tatarstan, Kazan in collaboration with the Institute of the Language, Literature and Art of the Academy of Sciences of the Republic of Tatarstan, Kazan.

The catalogue is made possible by R. Shamsutov, I. Alekseev, V. Bobrovnokov and P. Basharin in assistance  with M. Kemper, E. Ermakova and I. Zaitsev.

This exhibition is aimed to call attention to the problem of heritage conservation and study to revive an interest to the original traditional Art of the Volga-Ural region.