BORN BY THE WINDS OF ABSHERON. AZERBAIJANI PAINTERS OF 1960S—80S THE MASTERPIECES OF ART AND SCULPTURE BY OUTSTANDING AZERBAIJANI ARTISTS OF THE LATE 20TH AND EARLY 21ST CENTURY.

BORN BY THE WINDS OF ABSHERON. AZERBAIJANI PAINTERS OF 1960S—80S

THE MASTERPIECES OF ART AND SCULPTURE BY OUTSTANDING AZERBAIJANI ARTISTS OF THE LATE 20TH AND EARLY 21ST CENTURY.

“Born by the Winds of Absheron. Azerbaijani painters of 1960s—80s” is the common project of the Erarta Museum of Contemporary Art, Heydar Aliyev Foundation and Mardjani Foundation.

At the exhibition you can see works by classical Azerbaijani painters of the 20th century.

Together with the masterpieces of Togrul Narimanbekov, Geyur Yunus, pictures by Javad Mirjavadov, Tofik Javadov, Ashraf Murad, Kamal Ahmad, Rasim Babayev and the sculptor Fazil Nadjafov who represent the unique art community in Azerbaijani art of 1960s—80s known as the “Absheron school” can be seen at the Erarta Museum of Contemporary Art for the first time.

These painters were innovators and non-conformists who had great influence on modern Azerbaijani art and defined the ways of its further development. All these artists are united by their love to their native Absheron. The peninsula's unusual nature, its rocky fire-breathing land, history and the special character of Absheron have formed the Absheron theme which is common in Azerbaijani art and at the same time personal and intimate for every artist.

Absheron is the symbol of motherland and the inexhaustible source of inspiration. The organic part of the artists' works are the images and features of Azerbaijani folklore, folk arts and crafts, monumental ornaments, book miniatures, prehistoric monuments of Gobustan.

The exhibition includes more than 40 works of art and sculpture from the collections of the biggest museums of Azerbaijan: the National Museum of Arts, the State Picture Gallery of Azerbaijan, the Museum of Modern Art, the Azerbaijani Art of the 20th and 21st century Museum. Within the exposition, there are paintings from Baku galleries, such as Nar and QGallery, from the Mardjani Foundation (Moscow) and the sculptures presented by Fazil Nadjafov. 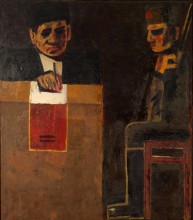 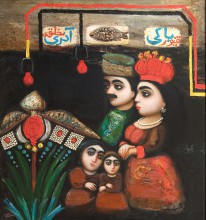 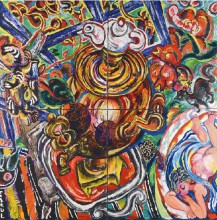