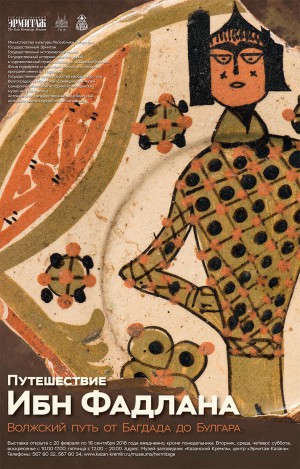 On 19 February 2016, the exhibition “Ibn Fadlan's Journey: Volga Route from Baghdad to Bulghar” opened in the Hermitage–Kazan Centre.

The basis for this exhibition is the Book by Ahmad ibn Fadlan, an Arabic diplomat and the second-ranking official in the embassy of Abbasid Caliph al-Muqtadir to Almysh, the emir of Volga Bulgaria, in 921-922. The route of the mission spanned from Baghdad to Bulgar across lands inhabited by various nations. The most important information about them can be found in ibn Fadlan’s Book.

The enduring value of this magnificent source, both in the 10th century when the Book was w  ritten and today, is in the accuracy of the itinerary by a witness who personally encountered other worlds which frequently came in conflict with how the lettered metropolitan Arab treated life. Vivid descriptions of his eyewitness account combined with the author’s clear judgements make that treatise a remarkable literary monument which still makes a captivating read.

The exhibition is meant to depict the world as existed  in the era of ibn Fadlan, or rather different interacting worlds through which he travelled, to demonstrate national cultures of past days; not only those described by ibn Fadlan but those pertaining to the Samanid Empire, Khazaria, Volga Bulgaria and Kievan Rus.

The era of ibn Fadlan means here the period of relatively peaceful living on the vast territory of the Old World that started when early medieval states were formed both in Eastern Europe and the Middle East in the 8th-9th centuries and lasted up until the early 13th century, when the Mongol invasion, a turning point in the Eurasian history, happened. The latter brought radical changes to the political map and originated new styles in applied arts of nomadic and agricultural nations.

Time limits are expanded because various nations had their periods of prosperity as reflected in their art at various stages within the epoch. The extensive time span allowed us to demonstrate the greatest achievements of different peoples, the development of different styles, their rise and, sometimes, extinction.

Ibn Fadlan’s era was not serene indeed. Some states as Khazaria defeated by Russian prince Sviatoslav vanished long time before the invasion by Genghis Khan hordes. However some political formations, even after ceased in being, induced a strong cultural impulse that continued to lay the basis for new cultural phenomena. Openness to influence and borrowing is typical of early medieval societies. This cultural dialogue between nomads and agricultural nations was promoted by ramified trade routes which connected the East and the West, the North and the South. This exhibition shows one of the main roads of transcontinental traffic networks, that, for our purpose, can be called the Volga Overland Route. This is the route that ibn Fadlan followed with a caravan of Khwarezm merchants, and those were not only goods and coins but ideas, fairy tales, literature stories, advanced technologies that moved along the route and are represented by the items and monuments of art put on display here.

A scholarly catalogue has been produced for the exhibition (Mardjani Publishing House, Moscow, 2016) that includes a new translation of Ahmad ibn Fadlan’s work, a welcome from Rustam Minnikhanov, the President of the Republic of Tatarstan, and an article by Mikhail Piotrovsky, General Director of the State Hermitage.